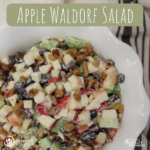 Note: If there is leftover salad, cover and store in the refrigerator.